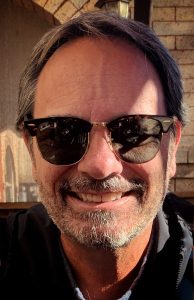 I witnessed totality. The total eclipse of the sun. And for a moment I was obliterated.

Everything fell away—my car, my house, my job, my friends and family, my self. In the face of that black “hole” in my universe, I was no better than my ancestors 200,000 years ago. I stood slack jaw, grasping at. . . something. . . anything.

I had a similar experience when I watched the births of my daughter and son. And to a lesser extent when I find myself lost in the pattern of an owl’s feather, in light and shadow on the human figure, or the dance of a bee on flowers.

At those moments I know that there is something beneath it all. I honestly don’t know if it’s a divine spirit or symphonic mathematics. Whatever it is, my art takes aim at it. My arrows are mythology, the feminine, science, and nature. Like my ancient ancestors, I am back on the hunt.

Sam Pisciotta lives and works in Colorado. He writes and draws, and sometimes paints. His mediums of choice include graphite, charcoal, pastel, and watercolor. See more of his work! Follow him on Instagram and Facebook.

Current and Past Shows