All posts under Graphite 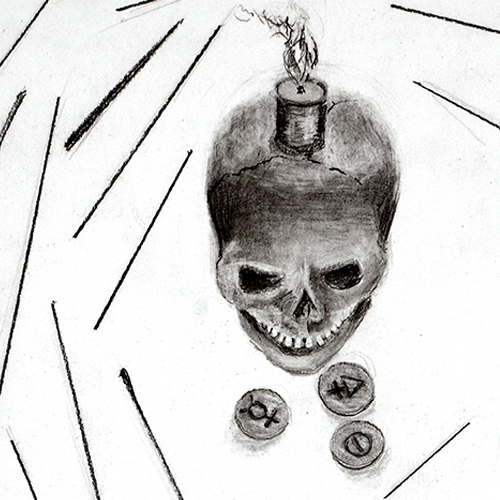 Over the course of fours weeks this winter, I created a visual art journal dealing with my understanding of the creative process. I used the themes of alchemy and journey as metaphor and peppered the pages with recurring symbols.  Mostly, I had fun!

What I found at the end of the project is that my chops for drawing from imagination had improved.  I also rediscovered my love for writing.

You can download a .pdf file by clicking the link below.  Hope you enjoy looking at it as much as I enjoyed creating it!

from Fairy Tales for a Dying World

I once heard a story about a girl who fell in love with the moon. She was pale and thin and silent and had been so ever since losing her parents. Her classmates sometimes called to her, but she remained steadfast in her distance, skirting a wide arc around their bustle and chatter.

One evening, as the story goes, Luna woke to a gentle tapping at her bedroom’s window. She listened for a while to the soft thud that came in spurts and pauses, until finally slipping from her bed to draw back the curtains.

The full moon before her radiated a haunting light. Another few taps brought her focus to the windowpane. There she saw a moth fluttering against the glass. But her gaze was quickly pulled back to the brilliance of the moon hanging low in the sky.

Luna put on her robe and slippers, then headed down the stairs and out the back door of her aunt’s house. Her aunt had taken custody after the accident but was too tired to watch her properly. Luna easily slipped from the house unnoticed.

She walked for hours that first night, trying to get closer to the moon as it rose higher and farther away. When she finally stopped, she realized she had reached the outskirts of town. She turned to head back, and suddenly felt a breath at the back of her neck.  She reeled around. No one was there. Perhaps a breeze, and only the moon—now a pale disc sitting small and distant in the sky.

On the second night she was again pulled awake by a tapping at her window.  The moon was nearly as full and just as beautiful, and for the second time she left her aunt’s house and walked to meet the moon. With every step she took, the silver orb rose higher and farther away. Hours later she stopped. She stared up at the moon, and her eyes felt heavy with sleep. She turned to make her way back home.

Once again, she felt the cold breath at her back, but this time she did not turn. And with a shaky voice she asked, “Are you there?”

“Because,” said the moon, “you were crying in your sleep.”

Moon was right. For the first time, Luna realized that she had indeed been crying when she woke. Why hadn’t she noticed? Perhaps tears had become so commonplace.

The moon walked with Luna back to her aunt’s house, and along the way they talked of many things—about how lonely her aunt’s house felt, about how empty her school felt. They talked about Luna’s parents and how thinking about them made Luna want to curl up in a ball on the big, orange chair in the study.

When Luna returned to her bedroom that night and climbed back into her bed, she found that sleep came easily. And when she opened her eyes the next morning, she knew that she had not been crying.

The third night was the same, as was the night after that. Night after night, Luna and the moon walked along the streets, sometimes talking, sometimes not—and each night Luna returned to her bed and fell into a deep and peaceful slumber.

During the day, Luna would attend school. She began to realize that people noticed her less. Eventually, it seemed to Luna that people were gazing right through her. In classes, the teachers never called on her anymore, and the other students moved around her as if they were ghosts, their voices mere echoes. Even her own eyes had trouble holding her reflection in the mirror. It wasn’t until nighttime, bathed in the light of the moon, that her body felt fully formed.

One day, however, something unusual happened. After bending to pick up a pencil that had rolled from her desk, she looked up to see a boy named Ravi starring straight at her. His gaze startled her. It had been so long since anyone had noticed.

Luna starred back without replying.

“But you’re thinner,” said Ravi. “There’s less of you somehow.”

“What do you know about anything?” Luna snapped the words at him, hoping he would turn away.

“You need to stay out of the moonlight,” said Ravi matter-of-factly, as if helping her solve an algebra equation. “My grandmother says that we’re children of the Sun.”

“Mind your own business,” said Luna before turning around. But she glanced back quickly and added, “stop looking at me.”

Luna quit going to school after that, and her aunt never received a call questioning her absences.  Instead, she used the daytime to sleep, so that she could stay awake longer into the early hours of the morning. Even after the moon had said goodnight, the stars would keep her company. But it was the moon that Luna loved, and when the moon began to wane beyond her quarter, Luna felt the old loneliness and tears once again fill her eyes.

“Please stay,” she begged, watching the thin scrap of light through the bedroom window.

Luna ran from her aunt’s house determined to dissolve in what remained of the moon’s dying light.  There, near the apple tree, at the edge of the tree’s shadow, the moonlight seemed most bright. Luna rushed into it, tearing at her clothing, heaping it at her feet.

“Take me with you.” She was crying now. “There’s nothing left here.” The tears burned at her eyes. She looked at her pale skin. “Take me with you,” she whispered. And her flesh grew paler in the silver light.

The next morning, the sun rose as it had for countless millennia. The birds woke and came to pick worms from the ground around Luna’s discarded clothing. The aunt sat in her kitchen, head in hand, breathing in the aroma of coffee, dancing around the idea that something or someone had been lost.

Only the boy Ravi knew who that someone was. And after the waxing of the moon, as the light once again sat large and full in the sky, he would look up and swear that the moon looked brighter—and perhaps also happier.