I had lived alone in the house only a few months before I started hearing the music in my bedroom closet. The song was like the whisper of notes children hear from an ice cream truck still several blocks away–almost a dream, but real enough to make them run inside to beg for quarters. I couldn’t name a particular tune, but it was always cheerful, and I somehow knew that the tune itself never changed, only my perception of what I was hearing.

At times I thought I was listening to “Bicycle Built for Two,” and I could almost sing along. Then the tune was obviously “Sunny Side of the Street” or that song about swinging on a star. Yet, it was never really those either.

It was a large walk-in-style closet, mostly empty after my wife had removed her clothing and shoes when she left. But there was definitely music coming from within.

Two facts made these concerts eerier. First, the music began playing every night at 11:48 and ended precisely at midnight. Twelve minutes.

The number 12 can be divided by 1, 2, 3, 4, 6, and, of course, itself. Christ had twelve disciples. There are twelve signs of the zodiac. Twelve months in the year. The Buddha describes the twelve stages of rebirth. Twelve–the number of space and time, of cosmic order. If an angel reveals the number twelve, it is to convey that good things are coming.

The closet had only interior walls, and the source of the music wasn’t in any of the other rooms. I even climbed into the attic one night, stepping carefully around a dead mouse lying sprawled on dusty insulation. There was only silence there.

The next night, flashlight in hand, I slipped into the crawlspace. Believe me when I say that cold, damp air and cobwebs were not enough to discourage me from my investigation. Still, not a single note could be heard.

It’s true, I had been under a certain amount of stress. The death of my mother hit me hard. I had always thought I would have more time to say the things that remained unsaid. It didn’t help that her death came on the heels of a divorce that left these rooms far too quiet. It’s understandable that I should feel a small amount of disconnect, but these things I could manage, was managing, and I could feel myself healing every day.

The music came from the closet, that much was obvious. What worried me was that I could never find its source.

Solving the mystery became an obsession. During those twelve minutes each evening, I nearly tore the house apart scrambling for clues. During the day, I even questioned the neighbors–had they heard anything like music coming from my house? Had they heard any music in their own houses? What’s the name of that song from the Sound of Music about “warm apple strudel?” They looked at me with concern. I thanked them. Apologized. Told them not to worry.

I began to lose sleep.

It all came to a head one night. Exhausted, I dozed off around eight o’clock and woke hours later to the music humming in my ears. A soft moonlight shone through the window. I moved toward the closet and opened the door. The music filled the space. Always the same. Night after night. Loneliness twisted inside of me, pushing upward, threatening escape.

I stepped into the closet–everything in its place–but then I did something I had never thought to do. How had I never thought to do it? I don’t have an answer. I can only tell you that until that night, it had never occurred to me to shut the door while I was still in the closet. After a week and five days of this madness that had brought me to the brink of tears, I reached back for the doorknob and pulled the door closed behind me.

It was dark. Too dark to see. I reached out, grasping at stacks of sweaters and folds of clothing, but in my blindness, I could hear the song in a way that I had never heard before. The music filled the void–bouncing between stars, pulling at moons, careening around entire planets. Like a weathered canyon, my chest split open, and tribes of men gathered to paint the walls with ancient symbols.

I froze. My neurons flashed and popped. A luminescent giggle bubbled up, and my whole body buzzed with excitement that stretched up my spine. I strained to listen, afraid that it might slip back into the darkness.

I suddenly recognized what I was hearing.

I woke hours later still lying in the closet. It had been a long while since I had slept so soundly. The morning sunlight crept beneath the door, inviting me into the world. I stepped out of the closet to see a beautiful orange sunrise streaming through my bedroom window–and something else. The music was still playing, but its source had shifted. It wasn’t coming from my closet.

I placed one hand on my temple and the other on my chest. It was there. The deep sustained vibration of it. I smiled and wondered if anyone else would be able to hear it.

This story started with music. When I follow the thread of my life backward, music is always there. All the major events in my life (and the stretches in between) are marked by song. Listening to particular bits of music can trigger full memories. As a child, harmony was cooked into me during those early piano and guitar lessons. Vibrating strings passing into my core. I think many people have a similar relationship with music. It is something that brings us together as a species, riffing through time and space and playing to the beat of the drums pounding within our own chests.

“Humming by Moonlight” is about that. I hope you enjoy it. 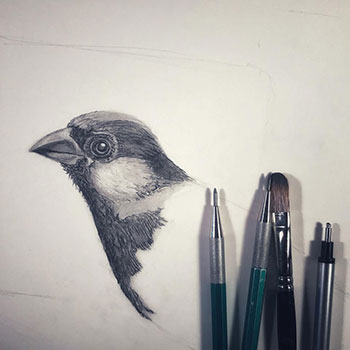